What Happened When Kasey Joined Forces With Other Parents 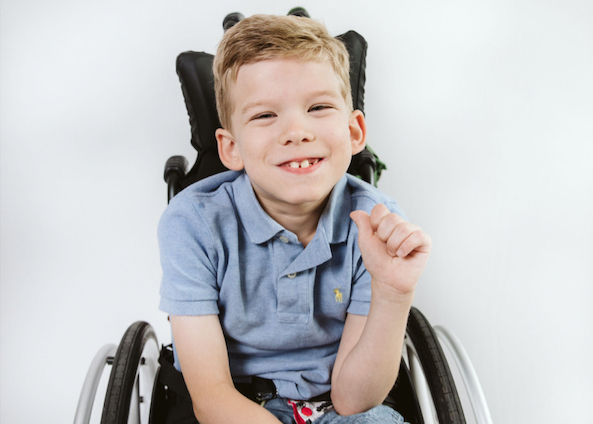 Ever since her son, Will, was diagnosed with SURF1-associated Leigh syndrome, Kasey has gone to great lengths to drive forward research not only for his disease, but for other rare diseases as well.
By Taylor Kane

After Will was diagnosed with SURF1-associated Leigh syndrome, a rare disease caused by a mutation on the SURF1 gene, a doctor told Kasey and her husband to take their son home and enjoy what time he had left.

“My life flashed in front of me. I felt sick to my stomach,” Kasey says.

Will had been hitting all of his milestones until he was 18 months old. He started tripping and tumbling, especially as it got closer to bedtime. Then, Kasey noticed Will fall and not pick himself up immediately after. She thought she may be paranoid, but deep down she knew something was wrong.

After an array of tests including a CT scan that identified lesions on his brain, Will received his diagnosis. SURF1 Leigh syndrome is a severe neurological disorder that, as Kasey describes, “takes away all your abilities, [but] doesn’t take away cognitive skills.”

After Will’s diagnosis, Kasey began looking at life through a different lens. “It’s the little things that matter,” she says. Will is not only her personal hero, but her family’s inspiration.

Still, it wasn’t always easy for Kasey to stay positive. She admits that the first six months after Will’s diagnosis was like “living in a nightmare.” This time was especially stressful for the family as Kasey and her husband also had a newborn daughter, who they knew could potentially be affected by the same condition. While Will was rapidly losing his physical abilities, Kasey says she was constantly watching her daughter to see if she too showed any signs of having the disease.

While a genetic test ultimately showed her daughter did not have SURF1-associated Leigh syndrome, Kasey says she regrets hyperfocusing on the chance that her daughter could have the condition. Looking back, she wishes she had been able to pay more attention to her daughter’s first few months of life. Kasey maintains that she and her husband got through this difficult time in their lives by consciously deciding not to dwell in fear and anger, but to fight and have hope.

This decision has not only transformed Kasey’s life, but has had a profound impact on the lives of others. In 2018, Kasey and several other families formed Cure SURF1 to fund a gene therapy project for their affected children. The organization is currently working with a biotechnology company that is preparing to launch a clinical trial for patients with SURF1-associated Leigh syndrome.

In addition, last year she and another rare disease mom created the Rare Village Foundation to provide fiscal sponsorships to parents and caregivers who want to start research projects for particular rare diseases.

“It’s up to the rare disease community to push forward for research,” she says.

Kasey encourages other rare disease parents who want to get involved in research efforts for rare diseases to “see if there are any existing foundations, and if not, approach experts and see if they are willing to collaborate.” She refers to the sharing of patient medical records as “the missing link” necessary to put all the pieces of the puzzle of rare disease research together. She describes the AllStripes platform as an easy and accessible way for patients and families to share real world data and have access to all of their medical records.

“Finally, patients have power! AllStripes can analyze and share data within our community through their simple yet powerful platform,” Kasey says.

Ultimately, Kasey says her son, Will, is her driving force to help other families.

“Put your dream out there,” Kasey advises. “You never know when you may find another family and join forces.”