‘It’s Important to Us That People Know Who She Was’ 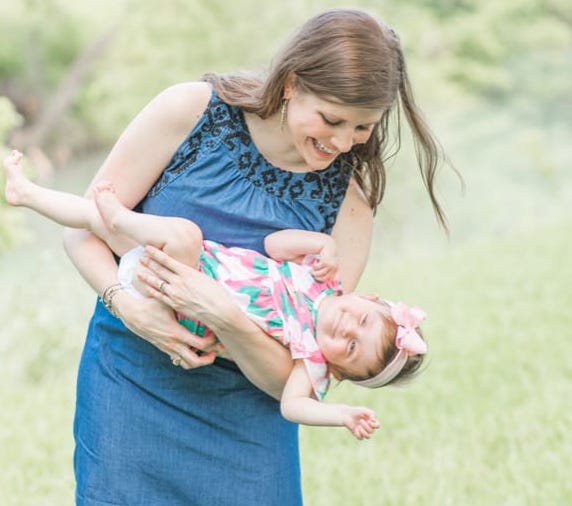 Caitrin lost her daughter to Sandhoff disease and sees contributing to research as one way to make sure Embree's memory lives on.
By Taylor Kane

When Caitrin’s daughter, Embree, was 9 months old she stopped noticing her favorite toy.

Two months prior, she was hospitalized for an infection. After the hospitalization, Caitrin had noticed her daughter continue to get weaker and become uninterested in solid foods. The biggest shock, however, came when Caitrin realized her daughter lost her vision: “We put her favorite toy in front of her and she looked right past it.”

Caitrin and her husband knew “something was really wrong” with their daughter. They were trying to see a geneticist, but unfortunately it was a six month wait to get an appointment. As a mother, Caitrin knew she needed answers, and as a nurse, she knew how to get those as soon as possible.

The couple took Embree to the emergency room and 48 hours later, she was seen by a geneticist. Embree had an MRI which showed “an overabundance of white matter” and she was found to have a ‘cherry red spot’ in her eyes, which is a clinical sign of a type of lysosomal storage disorder called Tay-Sachs disease.

But Embree did not have Tay-Sachs disease. Four weeks later, genetic testing results found her to have Sandhoff disease. Tay-Sachs and Sandhoff are both forms of GM2 gangliosidosis, but Sandhoff is much more rare, affecting only one in a million babies. In the case of infantile Sandhoff disease, infants usually do not live past 2 to 5 years old.

Over the next few months, Caitrin began to prepare for losing her daughter. Embree’s symptoms were progressing quickly. She could no longer swallow so had to have a G-tube surgically placed and soon started having seizures. Caitrin and her husband decided that they wanted to keep their daughter as comfortable as possible and worked with Embree’s palliative care team to put a do-not-resuscitate order in place.

“Knowing what her prognosis was, I didn’t want her to have any pain or suffering,” Caitrin explains. Eventually, Embree was no longer able to tolerate tube feedings and developed a bowel blockage that caused sepsis. She passed away at home under hospice care in September 2018.

After Embree passed away, Caitrin says her and husband grieved very differently but eventually were able to accept their differences. They agreed that they wanted to grow their family, and they also wanted to grow Embree’s legacy by participating in research.

Sandhoff disease follows an autosomal recessive inheritance pattern, and at the time Embree received her diagnosis, Caitrin and her husband found out they were both carriers of the rare condition. With this knowledge, the couple decided to pursue in vitro fertilization with preimplantation testing (IVF with PGT) to grow their family. Today, they have a son, who does not have Sandhoff disease.

The family has taken steps to make sure Embree’s legacy lives on, something Caitrin’s husband spoke at the memorial service. One of the ways the couple wants to do this is by advancing treatments for others impacted by Sandhoff disease and all types of leukodystrophy.

Caitrin signed up for AllStripes to contribute Embree’s medical records to the GM2 research program.

“We want her to be known to help with research. It’s important to us for people to know who she was, that she was real, that she lived, and that she was a beautiful little girl.”