‘A Liver Transplant Is a Huge Freaking Deal’ 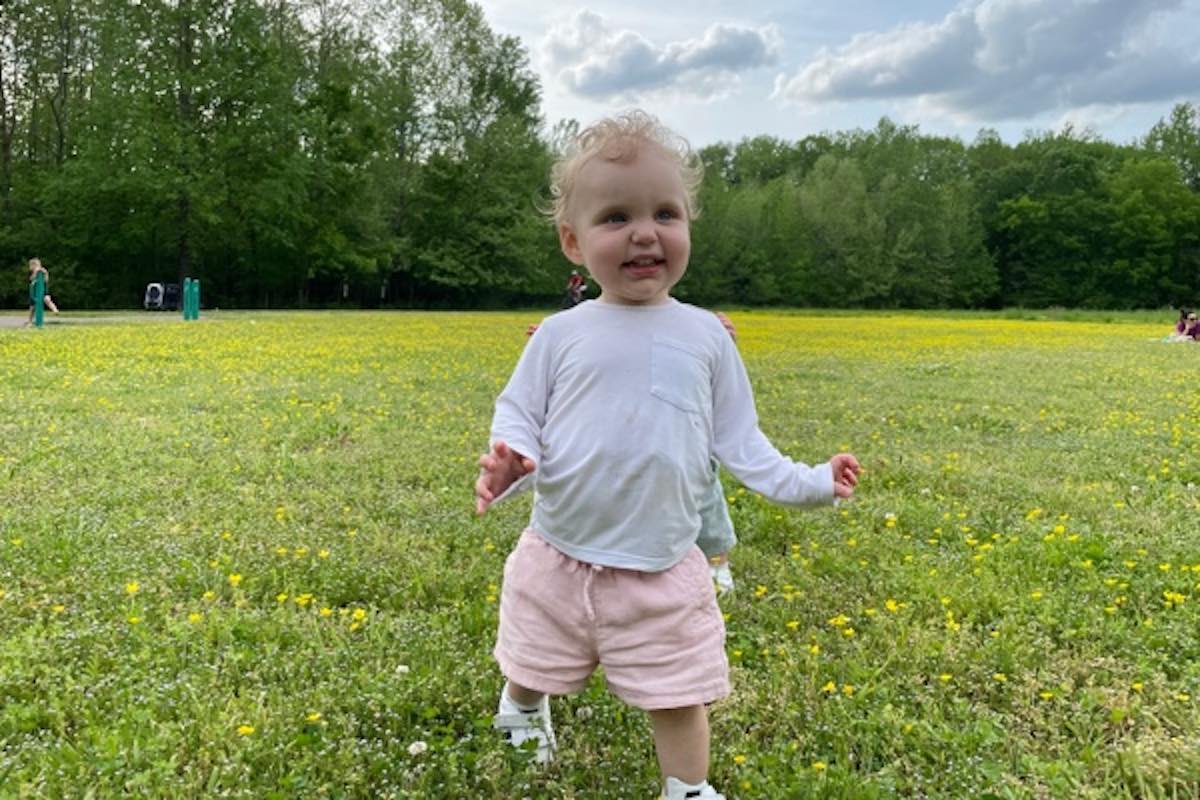 MMA is such a small part of the picture of what her life looks like, and now we can really just bask in the joy of Callaway experiencing life.
by Carina Farkas, as-told-to AllStripes

Carina daughter, Callaway, experienced lethargy and difficulty eating soon after birth, and was later diagnosed with methylmalonic acidemia (MMA), an inherited disease in which the body is unable to process certain proteins and fats properly. Infants with MMA can experience vomiting, dehydration, developmental delay, lethargy, an enlarged liver and failure to thrive; long-term complications may include intellectual disability and chronic kidney disease. As a result of her MMA, Callaway spent much of her first year in the hospital before doctors ultimately recommended a life-saving liver transplant — a tough decision, but one Carina says alleviated much of her family’s daily fear.

The start of our experience with methylmalonic acidemia (MMA) was three days after our daughter Callaway was born. I gave birth in a birthing center in June of 2020, so it was full-on pandemic land at that point. We went home, but by the second day we noticed that she was pretty lethargic and just wouldn't eat at all. She was having little episodes of vomiting quickly after eating but we just thought it was spit up.

We were monitoring her for jaundice, for COVID symptoms — all of the things that they had told us to do in the first few days of life. We were really looking closely at all of her: how she was functioning, taking her temperature a lot, counting how many heartbeats she had per minute. Some of those things were just enough out of range that we ended up going to an urgent care. It was on a Saturday, so it was an after-hours clinic. They put a blood pressure monitor on her, listened to her heart and took a rectal temperature, and called for hospital transport within two minutes of us getting there.

We were transported by ambulance to the children's hospital here in Nashville — Vanderbilt Children's Hospital — and it was that night that we first heard the words “metabolic disorder.” We also learned Callaway either had methylmalonic acidemia or propionic acidemia.

Her geneticist sat us down the next day and said, "These next 24 hours will tell us everything we need to know about if she's going to make it. If I had any hope to give you, if I had any good news to give you, then I would, but I just don't." Callaway had global brain swelling at that point. She was intubated and had almost crashed a few times. Things were just looking very dire for our four day old.

She was in the pediatric intensive care unit for seven days. On the fourth day, a medicine brought down her ammonia, and then, subsequently, the methylmalonic acid that was building up in her body and creating the ammonia. I don't know that she would be here if it weren't for that medicine, which was not FDA-approved for MMA at the time.

Her body was able to come back online, and we spent the next three weeks on the general floor of the hospital before going home with not a healthy baby, but a baby who we were pretty sure was going to live long enough for us to try and figure out how to manage her severe MMA.

For the first year, we had the personal cell phone numbers of the genetic dietician and her genetic nurse practitioner. They gave us their numbers before we were discharged from the hospital and said, "We're your new best friends. Call or text us literally any time.” They took out the middleman completely and were just in complete service to us.

Callaway became tube-fed dependent by month eight of her life. We could not stay out of the hospital. Her vomiting was too extreme and her lethargy was severe. We basically spent four months in the hospital. We would try to leave, she would get stable enough to leave, and then fall ill again pretty quickly. At the 10 or 11 month mark, the biochemical geneticist pulled us aside after she almost died from a norovirus infection and said, "This girl needs a liver transplant. It's time."

She got a liver transplant the day after her first birthday. The morning of June 19th, we got the call, and headed back to the hospital. She had her new liver working in her body a few minutes before midnight on June 19th.

The transplant has been life-changing. I cannot imagine doing what we did for that first year for multiple more years while we wait for clinical trials. It was a brutal decision, because it’s like trading one chronic disease for another. A liver transplant is a huge freaking deal, because then you're immunosuppressed for life and there are countless other complications and types of cancers you're at higher risk for. That was all on the table, but we decided with the help of a lot of doctors and an ethics committee that the best thing for Callaway at that moment was a liver transplant.

We have only been admitted to the hospital a couple times since transplant, and each time we are home within two days. We’ve had lots of clinic visits, lots and lots of lab visits, lots and lots of messaging back and forth with both genetics and now with hepatology, the liver team — they promise you that the first year after a transplant will be hell on earth, and the worst year of your life. But we had already been through the worst year of our lives, so this second year has not been nearly as catastrophic as the first one. We were well prepared for lots of visits and having someone else control our lives. Now we get to experience those things without the daily fear that she's going to have a metabolic crisis. That's what the transplant gave to us.

It has been so painful to watch her as a tiny, tiny child suffer the way she's suffered. At the same time, there's been so much relief and gratitude that she's been this little, because my hope is that she's gone through the worst of it without having that explicit memory.

MMA is such a small part of the picture of what her life looks like, and now we can really just bask in the joy of Callaway experiencing life. She is just a happy, fun, well-adjusted, curious kid and that makes it all worth it. It's really healing for us as parents to hear her walk around going, "Happy, happy!" That's her newest word. I know that that's truly how she feels. She feels happy, even with MMA and a liver transplant.

It can be easy to feel isolated and lonely on this journey, because MMA is a rare disease. I have never met another person who cares for a kiddo with MMA, but I know that there are people out there who know what it’s like. My hope would be that people read our story, and want to contribute their own stories, and their own medical records and their own information, so that we can work together to enhance the quality of life of MMA kids and families.

If you have been impacted by
MMA
,
learn more about the benefits of joining AllStripes
by visiting our
MMA
research program page.
Share: