Stella's CDKL5 Diagnosis Showed Him What Life Is All About 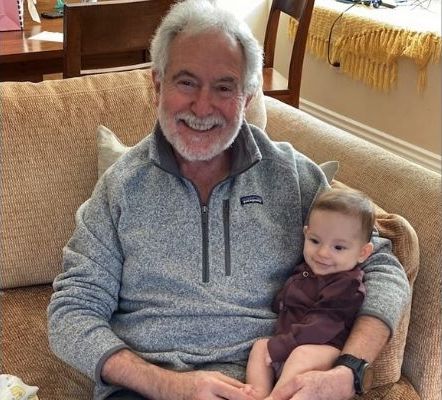 Joe is determined to help his family, one meal at a time.
By José Vadi

Joe's passion has always been being there for his family. When he became a grandfather in November of 2019, he was ecstatic — all he wanted to do was help out with his first grandchild. He describes Stella as the love of his life, a little girl who delights in being bounced and relishes eating.

One day last April, Joe’s daughter, Jessica, called him at 8:30 in the morning. Joe says she sounded elated: At 5 months old, Stella had rolled over for the first time. “We were so happy,” Joe remembers, “so excited.” Just an hour later, Jessica called back again, explaining that she thought she’d seen Stella have a seizure.

The family’s pediatrician referred them to a neurologist, and within days she was undergoing tests at UCLA, coincidentally under the medical guidance of the founding lead for the Los Angeles CDKL5 Center of Excellence. Stella was initially put on anti-seizure medication, which unfortunately didn’t stop her from seizing. About two weeks after that first seizure, one of Stella’s test results indicated the marker for CDKL5, an X-linked genetic disorder characterized by seizures that begin in infancy.

As Joe and his family would soon learn, CDKL5 symptoms usually occur within a baby’s first three months, and can appear as early as the first week of life. Most children have daily seizures, and many have severe intellectual disabilities and little or no speech. Right now, the condition is managed primarily through different forms of therapy. There is no current targeted treatment or gene therapy for CDKL5. “When you read that,” Joe says, “your heart just collapses.”

Joe explains that Stella’s diagnosis has been a life-changing experience for his family as a whole. “It’s one of those things where you stay focused on your mission to help her,” he says. “We hope we can provide her with as much fulfillment as we can.”

Amidst the pandemic, Stella’s parents booked as many therapy opportunities as possible, including remote speech therapy. Joe explains that his daughter and son-in-law are extremely busy managing Stella’s care and staying vigilant in case she seizes. Witnessing one of her seizures, he says, is “heart-wrenching.”

After a period on steroids and then hormones, Stella was still seizing, and by the summer of 2020, Stella’s care team wanted to try a ketogenic diet, a strict low-carbohydrate diet that’s sometimes used to treat epileptic seizures. As someone who’s always loved to cook, Joe knew this was one small way he could help.

“I get the recipes from the dietician and twice a week I put a batch together of food for Stella,” he explains. “She’s a great eater! When you feed her, see her chew the food, see a smile on her face — I can’t tell you how gratifying that is.”

After a short amount of time on a ketogenic diet, Stella’s seizures stopped, a remarkable “honeymoon period” that lasted for 36 days. Though her seizures have returned, Joe is still cooking for Stella — and her parents. “I make sandwiches for them every day, just so they have something to reach for,” he says. “If they throw it out, that’s fine. If not, they have something in the fridge.”

“The most important thing is to appreciate Stella for who she is. The thing that I’ve gained over the last year is just an appreciation for what life is all about. We take so much for granted.”

AllStripes community members might recognize Joe from the CDKL5 research program page gallery where he’s seen sitting with Stella on his lap, glowing with grandfatherly pride. His whole family is united in their determination to find a cure for CDKL5 and stay #StellaStrong. They’ve contributed Stella’s medical records to research through AllStripes, to help grow knowledge about the condition and power multiple future studies.

“AllStripes is the friendliest link,” he says. “From the website, the staff that I’ve worked with — it’s incredible. Your whole approach is very user-friendly and responsive. I get feedback all the time. It’s been an easy platform to communicate and navigate through. It’s been a very effective vehicle.”

If you have been impacted by
CDKL5
,
learn more about the benefits of joining AllStripes
by visiting our
CDKL5
research program page.
Share: