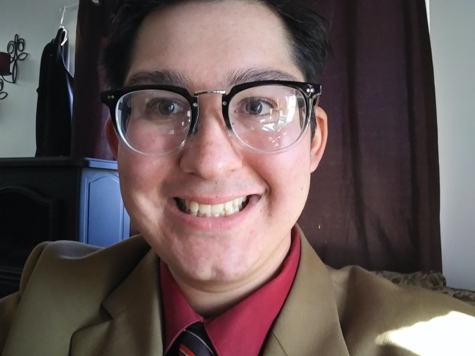 Jareb began experiencing symptoms of Wilson disease when he was a preteen. Today, he uses diet and medication to manage his condition, and has made creative adaptation in his work life.
By Catherine Cooke

Have you ever heard of a low-copper diet? No, it isn’t one of the latest weight-loss fads. Rather, it is a lifesaving shift in eating for those living with a rare copper metabolism disorder called Wilson disease.

Things like shellfish, nuts and chocolate are off-limits, but Jareb, who was diagnosed with the disease when he was 12 years old, is grateful for what is still okay to eat: candy!

As a preteen, Jareb was always tired and frequently out of breath. After visiting many doctors, he found out he had an enlarged liver, the first sign that there was something larger going on than just lack of sleep.

He underwent a liver biopsy that revealed he had the incredibly rare disease.

“My life was limited,” Jareb remembers. “The medication I took meant I couldn’t be in the sun as long as others.” And even though switching to a low-copper diet helped, it did not take away his fatigue.

Although he knew he would have to live a more difficult life, Jareb mostly felt “relieved” when he received his diagnosis. “I understood why I was feeling like this. Now, I have a reason. It confirmed that I had a disease.”

When he grew old enough, Jareb began looking for a job, but living in a “desert town without many opportunities” made it difficult. “I applied and applied and never got anything. I always thought they may have talked to people and thought ‘he has a disease, so he may be slow.’”

But the discrimination he faced would not hold Jareb back. In fact, it only fueled him to become entrepreneurial.

“I decided I must be self-employed. I was able to drive, so for six years I drove an elderly man and his son to the grocery store and on chores.”

When the man passed away, the son, who recognized Jareb’s hard work, made sure he found another opportunity. The son connected Jareb with folks who need help with yard work.

Now, Jareb has great clients who understand his limitations and respect the adaptations he makes to be successful in his job: “I wear a big ol' hat, and I know my limits. I can only do three to four hours a day and then will come back tomorrow to finish the work.”

Jareb has connected with others living with Wilson disease through social media, encouraging them to “Just keep grinding. Keep doing what you want to do. Look forward. Don’t look to the past. Know your limitations.”

We admire Jareb for his strength and resilience. One of the prime examples of that? Instead of being devastated he had to give up his favorite mint chocolate chip ice cream, he simply switched to vanilla.