A Coin-Sized Dent in Sarah’s Skull Was the First Sign of GSD, or ‘Vanishing Bone Disease’ 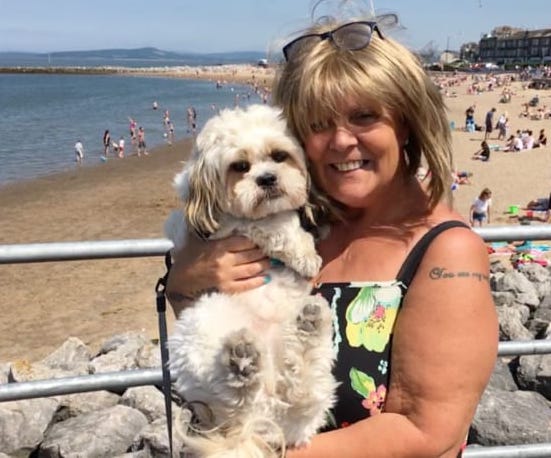 When Sarah discovered a large dent on top of her head, it took several doctors to figure out that she had Gorham-Stout disease, which affects only 200 people in the world.
By Cat Cooke

On an otherwise normal day in 2008, Sarah was driving in her car near her home in Liverpool, England, when she casually touched the top of her head. But this move – one that many of us do without even realizing – quickly turned alarming when she felt a giant dent on top of her head. While she didn’t know it then, finding that dent was the beginning of a long journey ahead.

Sarah got an MRI and CT scan, and a neurologist promptly decided she would also need a biopsy of the area of her skull that seemed to have disappeared.

The results of those scans and biopsy? Nothing.

It was disheartening at first. How could a whole section of her skull just be gone? There had to be something going on, and Sarah refused to take “nothing” for an answer.

Thankfully, her doctors agreed and sent off the specimen to be examined by a research center in Florida with resources to test for more diseases.

When the results came in, Sarah was shocked to learn that she was living with an incredibly rare disorder called Gorham-Stout disease (GSD) that only affects around 200 people (that doctors know of) in the world. Colloquially referred to as “vanishing” or “disappearing bone disease,” GSD is a disease that is characterized by bone loss. “It can appear in any bone,” Sarah describes, “but the main ones are your big bones like your skull, femur, or hips– but it can come anywhere really. It’s a disease that’s eating my skull away.”

Receiving the diagnosis was, at first, overwhelming: “It was quite scary because there wasn’t a lot known about it. Even if you went online, there wasn’t anything,” Sarah remembers.

Feeling incredibly alone and hopeless, Sarah went through a painful depression when she was first diagnosed. “I was very down and upset and cut my self off from everything and everyone.”

But going on antidepressant medication and finding others living with GSD helped pull her out of a dark time. Through the Lymphangiomatosis & Gorham’s Disease Alliance (LGDA), Sarah was excited to have “met so many people at conferences and online who have the same diagnosis. We just help each other so much when you’re feeling down or are in a lot of pain.”

Today, Sarah is mostly cheerful and positive. “I’m fine with it. There’s nothing I can do now. I just have to get on with it,” she shares about why she continues to live a full life despite having a rare disease.

The hole in her head has continued to grow – from starting at around the size of a U.S. quarter coin to now around one-third of her head – and she worries it might spread to other parts of her body.

“Every little ache I have in my bones, I think, ‘has it popped up there?’ You’re forever thinking that it’s gonna come to another part of your body. You’re permanently on edge.” GSD also causes Sarah to be constantly in pain and tired all the time, which has affected her social life.

She’s tried various treatments, such as radiotherapy and chemotherapy injections at home. “It’s all hit or miss,” she says. “Nobody really knows how to treat it or how to cure it.”

That’s why Sarah has joined LGDA’s partner, AllStripes, a platform that enables rare disease patients and caregivers to access all their medical records online and contribute their de-identified medical history to further research for their condition.

“You go to so many different hospitals. My notes are all over the U.K. AllStripes has everything together. With everyone giving their information, it’s going to be very helpful to the Gorham’s community. There’s hardly anyone who knows anything about our disease, so the more publicity it gets, the better.”