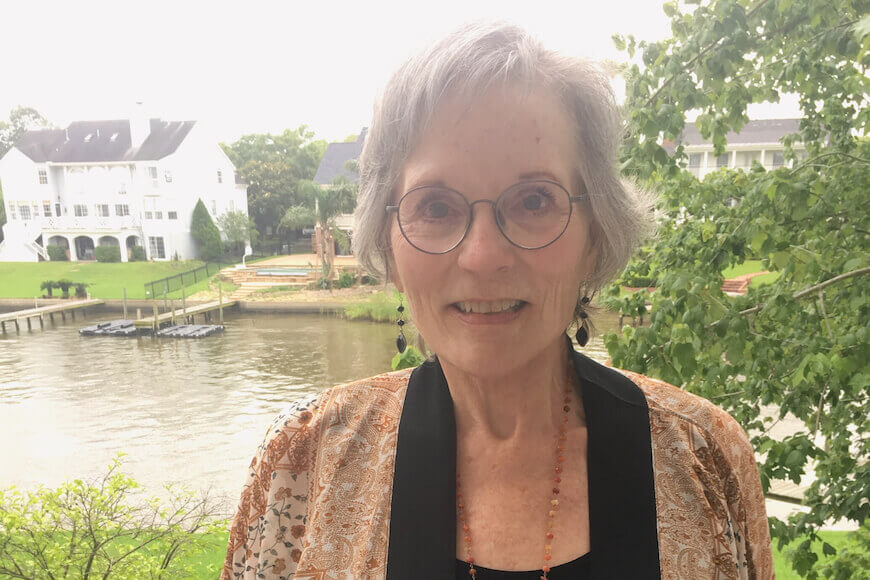 Having dermatomyositis is life-changing, and you never know what your new normal is going to be.
By Lynn, as-told-to AllStripes

Into her late 60s, Lynn was enjoying retirement, running half-marathons, working out, traveling — all while planning a wedding and selling her house. When she was hit by muscle weakness, seemingly out of nowhere, she felt devastated and confused. After a number of misdiagnoses, Lynn was eventually diagnosed with dermatomyositis, a chronic rare muscle disease characterized by inflammation, muscle weakness and skin rashes. She then experienced some of the ups and downs inherent to the disease, but ultimately stabilized — and joined Myositis Support and Understanding Association (MSU) to support others in the community.

I was a runner, and I was training for the next half-marathon I was going to run. I also took some boxing lessons, some weight lifting, Zumba, Pilates. I wouldn’t say I was a gym rat, but I did a lot of exercise. At some point I noticed I was having trouble getting off the floor after a cooldown session. I thought, "Well, wow, this is strange." In my training runs, I felt exhausted.

At the same time, I was planning on getting married for the second time at the age of 69 — we had planned a wedding for September 2015. I was also busy trying to sell my house because I was going to move in with my new husband. As I was staging the house, cleaning up and throwing things out, I would get to the point where I would say “I'm exhausted," and I never characterized being tired that way. But I just had to stop and rest.

Then, I started getting a rash that didn't make sense. It was on strange places all over my body, which turned out to be a classical presentation of a dermatomyositis rash, but I didn’t know that at first. I went through about three months of getting tested and being misdiagnosed with everything from dermatitis to autoimmune hepatitis. The week I was closing on my house, I got a call from my primary-care provider, and they said, "You need to go to the emergency room immediately." Tests showed I might have rhabdomyolysis, which is a serious condition caused by muscle trauma and can lead to kidney failure. I was in the hospital for a week being treated, and after even more testing, they suspected I had dermatomyositis.

A week after I got out of the hospital I went in to see a rheumatologist. He tested my muscle strength and looked at my rash and he says, "Congratulations, you're one in a million. You have  dermatomyositis." Well, I didn't have a clue as to what that was — I couldn’t even pronounce it!  He told me it was chronic and talked about the testing he needed to do and how he would treat it and sent me home with literature. It wasn't until later  that I knew my life had changed. I had a rare disease with no cure and few treatment options. There were no guarantees of what the future held. Since leaving the hospital, my muscles had severely weakened, I couldn’t raise my hands above my head or get up easily from a chair. It felt like my muscles had turned to jelly.

All of a sudden, it was like the rug was pulled out from underneath me. Was this the way my life was going to be from now on, living with the uncertainty of whether or not my life would ever be “normal” again?

But I tried not to panic. I tried to take it a day at a time, and listen to what my doctor said and follow the treatment plan. In July of that year, I had a cruise planned with my daughter. I told my doctor, "I'm not going to miss this cruise, even though I couldn’t walk safely without a walker. Is that okay?" And he said, "Sure, as long as you take your medicine and don’t overdo it." So I packed my four-inch toilet riser and off I went, determined not to be afraid of traveling in my weakened condition. And I learned a lot about myself and my ability to adapt.

By the time I got married, I was stabilized, getting stronger every day and thinking the worst was behind me. But then I flared again, and this time an infection caused damage to my kidneys. I was in the hospital for a week — I could barely raise my head off of the pillow, I couldn’t stand up without help, I couldn’t eat. I lost muscle mass. I got a blood clot in my leg and was put on blood thinners. I had to go through physical therapy for seven months to get back to the point of being able to walk. This was my lowest point. I began to think this was what my life would be.

Gradually, I started getting better again. One of the issues that people with my disease have is  that they cycle up and down, and sometimes you can never get back to the way it was, and you just never know when it's going to hit again. You never know if the medicine is going to work or not, or how much your body can keep fighting or if you can keep a positive attitude. But I stabilized, and I started getting better to the point where I am now in total remission.

I'm not taking any medication, which is very rare. But I live knowing that my disease could flare at any time and that the next time could be worse.

I think one of the things that people don't understand with our disease, myositis, is that it is life-changing, and you never know what your normal is going to be. We all seek that normal, and there's always a new normal that comes along. It is sometimes invisible. You will hear this from many rare disease patients: "I look ‘normal’ on the outside, but on the inside, I'm not."

When I got better, I decided that I would give back, and the way I gave back was to join Myositis Support and Understanding Association (MSU) as a volunteer. I ran some of the support groups for a while, and then I decided that I would offer my services because I do have a science background and business experience. I’m now the Vice President, and I head up our patient-centered research effort. Joining MSU was a way for me to give back to the organization that had helped me through the dark days. In a way, I’ve found a new normal that has enriched my life. It gives me purpose to advocate for all who have been affected by this terrible disease.

MSU has partnered with AllStripes on their dermatomyositis and inclusion body myositis programs because we think they are on the leading edge of research and their programs give  voice to the needs of the patient. Patients can see the impact of their participation and how they can move research forward.