After Victor Was Diagnosed With CLOVES and MCAP, Jenny Decided to Focus on the Things He Can Do 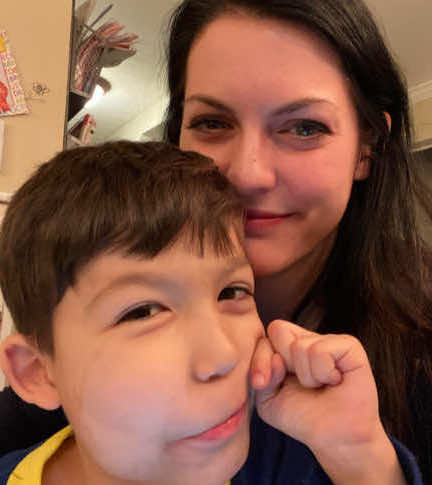 Jenny’s son, Victor, was born with an enlarged cheek, which turned out to be a fatty overgrowth caused by a mutation on Victor’s PIK3CA gene.
By Taylor Kane

When Jenny’s son, Victor, was born by emergency C-section, he had an enlarged cheek, which doctors explained away as birth trauma.

After Victor’s head ultrasound came back normal, Jennifer was skeptical: “I still don’t know how that could have possibly been the case.” As a former NICU nurse, she had a strong feeling there was something else at play, and noticed her son seizing from birth. “His eyes would shake back and forth, or his leg would bicycle. Because I worked in the NICU, I knew what seizures looked like in babies.”

After pushing for more investigation, the family met with a geneticist and neurologist.Victor was found to have a fatty tumor at the base of his spinal column and a tethered spinal cord, which led to his diagnosis of CLOVES syndrome at two months old. CLOVES is a type of PIK3CA-related overgrowth spectrum (PROS) disorder.

Years later, however, Victor faced an additional diagnosis: macrocephaly-capillary malformation (MCAP). Like CLOVES, MCAP is another disease on the PROS spectrum. Jenny explains that the difference between CLOVES and MCM isn’t well understood other than that both conditions are caused by mutations on the PIK3CA gene. Jenny understands MCAP as impacting the neck and head while CLOVES typically impacts the body below the neck.

For most of Victor’s life, his family identified with CLOVES syndrome and now had to face a new, albeit related diagnosis. Jenny explains that about 20% of people with CLOVES also have a dual-diagnosis of MCAP. Jenny describes both of Victor’s diagnoses as devastating, but feels hopeful seeing other kids with conditions on the PROS spectrum who are able to manage their conditions and live happy lives.

Jenny describes Victor as high functioning given his brain malformations and seizures. While Victor is on a repurposed cancer drug that helps him control his seizures, the drug doesn’t work for everyone with MCAP. Jenny joined AllStripes because she wants there to be treatment options for all people with PROS with the least amount of side effects and the greatest chance of a high quality life. Being part of AllStripes allows Jenny to contribute de-identified data from Victor’s medical records to PROS research.

Jenny believes her experience as a NICU nurse has had both its positives and negatives in terms of being a mother of a child with a rare disease. “Being a NICU nurse, I understood a lot of the doctor lingo,” but “it has made me very paranoid and extra cautious.” Jenny explains her background also led her to believe her son’s prognosis was much worse than it turned out to be. “In the NICU, you see the worst of everything.”

For the first year of Victor’s life, Jenny didn’t know if he would ever be able to walk or talk. Now, he is an ambulatory and verbal seven-year-old. Jenny focuses on the things that Victor can do, rather than what he can’t. Jenny says her son “loves life more than anybody in this world.”