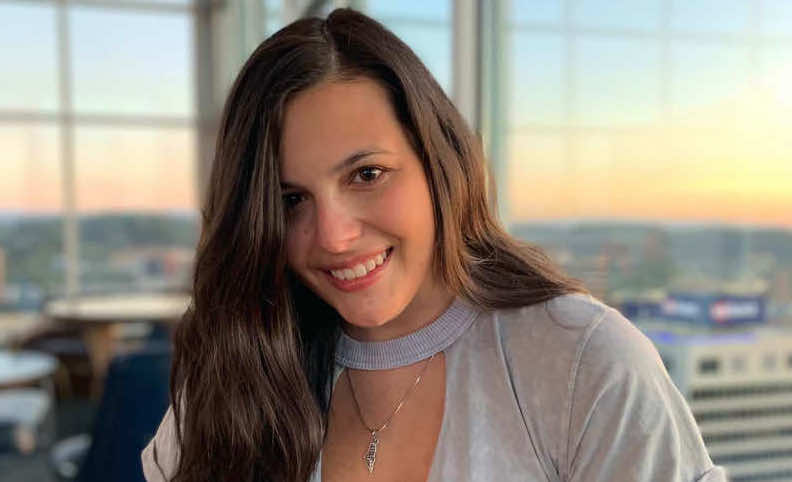 Leeya explains how a difficult time in her life allowed her to realize who her true friends are — and steered her toward advocating for the rare disease community on social media.
By Taylor Kane

Leeya began experiencing symptoms of GLA when she was nine years old. But it wasn’t until she was 15, after having trouble recovering from bouts of bronchitis and pneumonia, that a doctor performed a CT scan and realized something was very wrong.

“It looked like I had bone cancer or Leukemia,” Leeya explains.

After ruling out cancer, doctors performed a spleen biopsy on Leeya, which she says they should not have done, even though it led to her diagnosis of GLA. “I had a very bad complication. I gained 30 pounds of lymphatic fluid in two weeks. I looked like I was nine months pregnant at 15,” she recalls.

The next year of her life was full of unknowns, especially because her rare condition had only been recently described. She had always been an active person but was told she should no longer exercise, which was hard on her physically and mentally. She explains that the lack of movement led to her developing neuropathic pain in various areas of her body. Leeya also had to undergo a monthly chemo-based infusion which made her fatigued and nauseous: “It was a lot to adjust to.”

All the while, Leeya was trying to maintain her life as a normal high school student.

“I was basically stripped of my high school experience and I didn’t get it back until the end of my senior year,” she says.

Leeya explains this difficult time in her life allowed her to realize who her true friends are. “It’s sad, but looking back on it, they were not there for me,” Leeya acknowledges.

While in high school, Leeya attended a pediatric pain rehab clinic at Boston Children’s Hospital where she “learned to retrain her nervous system.” She learned how to manage her flair ups and how to lead a healthy, meaningful life while experiencing chronic pain: “Now, I understand my body.”

Now, Leeya is a 20-year-old college student. Thankfully, she is doing well and is able to be more active. One of the ways she continues to manage her pain is by engaging in activities that keep her mind busy, like Sudoku. “For my birthday, my roommates bought me this 600 puzzle Sudoku book. I was so excited,” she says.

Despite her pain, she motivates herself to keep moving. For example, if she walks around the block, she will reward herself by watching an episode of her favorite show on Netflix. “I have days when it’s really hard,” she says, “but having a good support system helps.”

Leeya learned the Lymphangiomatosis & Gorham’s Disease Alliance was partnering with AllStripes in the creation of a GLA research program and she knew she wanted to get involved.

She calls the AllStripes program a “win-win” situation in that patients retain access to their medical information and data while also contributing to research.

Plus, Leeya is looking forward to using the platform to organize her medical records, explaining it will make things a lot easier for her family who currently has an entire filing cabinet devoted to storing records.

Leeya believes that since her diagnosis her life has changed for the better. She has found a passion in advocating for people impacted by rare disease, especially on social media. She plans to continue her advocacy work throughout college and beyond!