‘I Would Gladly Trade My Disability Plate for a Cure’ 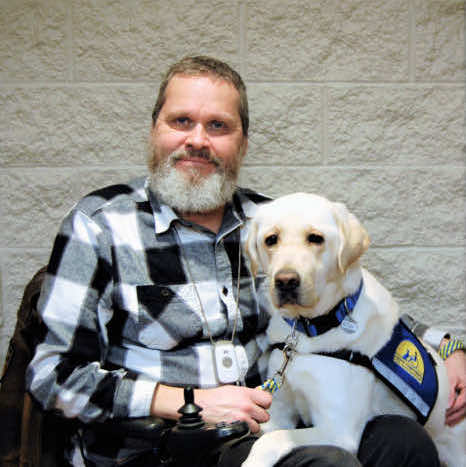 John was diagnosed with late-onset Tay-Sachs, and now he's raising awareness about the condition while continuing to pursue his passions.
By Taylor Kane

Imagine the shock of learning that you have a fatal rare disease, only to find out later that you were misdiagnosed and actually have a non-fatal but much more rare and less-researched condition. That’s exactly what happened to John, a patient ambassador for AllStripes’ GM2 program.

Misdiagnosis is not uncommon for rare disease patients. When he was 45 years old, John’s doctor noticed that his legs were twitching during a routine physical. Soon after, he received a diagnosis of amyotrophic lateral sclerosis, more commonly referred to as ALS.

You may have heard of ALS from the ice bucket challenge that went viral on social media in 2014. However, you may not have heard of GM2 disorders, or more specifically the variant late-onset Tay-Sachs disease. Neither had John, when he was informed he had this very rare form of Tay-Sachs disease, instead of ALS.

Upon learning that late-onset Tay-Sachs is not usually fatal, John felt relieved. Still, he had to accept that the road ahead would not be easy, and that his symptoms, including clumsiness and walking difficulties, would continue to progress.

“It was scary, but it was a relief.” John first began experiencing symptoms when he was in his 20s, and by his mid-30s, he started to have difficulty walking up and down the stairs. It took him another decade to receive a proper diagnosis, and once he did, he spent the next year in a deep depression.

During this year, he experienced several injuries (unrelated to his condition) and was unable to work full-time. “I was a full-time dad,” John explains. For most of his life, John had worked in his family’s flower shop. A few years before his son was born, he got his builder’s license. While he loved being able to spend more time with his son, John was plagued by the thought that he was no longer financially able to support his family.

Despite the fact that his ability to walk has continued to decline, John renewed his builder’s license this past May. Since then, he has replaced the door and windows in his basement, and is currently remodeling his kitchen. He has also modified his house to make it easier for him to get around, as he suspects he will soon need to use a walker.

John reveals that he’s not planning on giving up building anytime soon. “I will get by. I will get through it somehow.”

The work-disability balance has not been an easy one to manage, John explains. In addition to building, he works customer service at a movie theater, but has been out of work since the start of the COVID-19 pandemic. He worries that he may lose his job permanently.

“I’m 56 years old and disabled, how would I find another job?” John says he tries not to let the negative thoughts get to him. He reminds himself, “I have a lot of talent. I will find something to do.” He is determined to work as long as he is physically able.

John has also begun to prepare for a time when he is not able to do the routine, day-to-day activities he does now. In February he got a service dog and he uses an electric scooter at the grocery store to help him get around. “It’s getting more obvious I am having an issue,” he explains.

Still, John says he faces judgment for having a disability that is not entirely visible. He admits that he gets strange looks when he parks in a disabled parking spot and walks into a store. He wishes more people understood that not all disabilities are visible.

“I would gladly trade my disability plate for a cure.” He also believes that able-bodied people should appreciate the little things they can do, like walking up the stairs. “I watch people go up and down the stairs and wish I could do that,” John admits. “A lot of people don’t think about it. Until you are in that position, there are things you don’t think about.”

When John first researched late-onset Tay-Sachs disease, he turned off his computer in tears. Today, his shock and anguish has been replaced by determination and hope — he has participated in numerous research studies, including a natural history study, and is waiting to be contacted about a new clinical trial. He joined AllStripes to help get information about his condition out there. “Any study, I want to get involved,” John asserts.