‘You Have to Stay Positive — But You’ve Got to Get to That Point First.’ 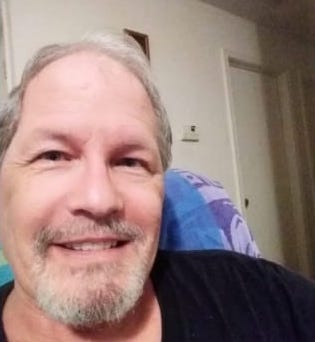 Blaine has fully embraced the community that helped him through the early years of his diagnosis with IBM, a rare muscle disease.
By José Vadi

Ten years ago Blaine was in the gym every other day, running 5 and 10K’s, raising a family and working as a retail manager in California, when something out of the ordinary happened at work.

“We got a shipment in and I tried to open it with my hand and it was a struggle. Weakness, yes, but also a feeling in the mode of someone scratching on a chalkboard — it was irritating.”

He had a similar experience at the gym doing progressively heavier dumbbell exercises. Another time, Blaine was doing yard work when his legs became tangled in some weeds and he fell. This happened in front of his family, who presumed Blaine was joking.

It’d take nearly four years before Blaine was diagnosed with inclusion body myositis (IBM), an inflammatory muscle disease and the most common muscle disease in patients over the age of 50. Patients with IBM experience muscle weakness and muscle wasting that slowly gets worse over time, particularly in the thighs, fingers, wrists and forearms. Some patients also have difficulties swallowing. There is currently no targeted treatment for IBM.

“When you first find out it’s hard not to go into the Why Me? Why can’t I win the lottery instead of this? You have to stay positive — but you’ve got to get to that point first.”

Not long after falling in front of his family, Blaine saw a neurologist and received what turned out to be a misdiagnosis. It was Blaine’s general practitioner who performed an MRI and identified an error in his previous diagnosis. He wrote the words “Inclusion Body Myositis” on a Post-it, and told Blaine to look it up before referring Blaine to a doctor 90 miles south of where he lives in California. It was there that further tests — including magnetic imaging tests, nerve conduction tests and muscle biopsies — confirmed his IBM diagnosis in the summer of 2012.

“I was ready to give up; the disease is so rare, I didn’t have anybody in town to talk to.”

Blaine eventually found Facebook groups of people living with IBM, “which helped tremendously.” He also started participating in events like the 2015 National Myositis Awareness Day with the San Francisco Giants, in part a celebration of former pro-baseball player and longtime Giants commentator Mike Krukow, who also lives with IBM. There, Blaine met other members of the IBM community and worked at a booth hosted by The Myositis Association.

“That’s what it’s all about: You’ve got to have people out there that you can reach out to and that know what you’re going through. The first couple years — and I know a lot of people feel this way — you’re alone. You don’t have anybody to reach out to.”

When the following year’s awareness day rolled around, a local anchorman interviewed Blaine about his experiences with IBM, prompting a member of the IBM community to call the television station and connect with Blaine himself. The meeting was extremely fortuitous: The caller knew of a doctor who treats people with IBM much closer to where Blaine lives than any of the places he’d been traveling to for care. Now, Blaine is treated much closer to home, all thanks to sharing his story on the evening news.

When Blaine encountered AllStripes through a friend’s Facebook group, he told himself, “Why wouldn’t I want to do this?” He’s now an AllStripes Ambassador, and draws inspiration from famed musician Peter Frampton’s recent announcement that he’s living with IBM.

“He’s out there helping with awareness and raising funds,” Blaine says. “Awareness is the only way we’re going to find a cure or treatment.”