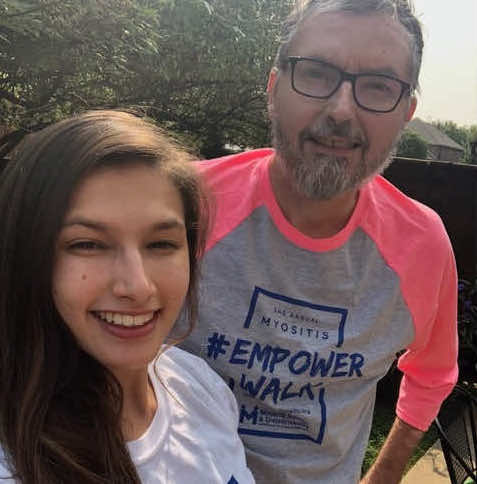 Manuel sees the people around him as his greatest strength, and believes that finding the IBM community has given him purpose.
By Taylor Kane

Six years before his diagnosis, Manuel noticed he had to slow down and drink more water while eating but didn’t think much of that warning sign at the time.

Soon after, Manuel realized he was having trouble standing from chairs and noticed his bicep muscles getting weaker. Rather than addressing the issue, his doctor told him to exercise more. Manuel eventually went to a neurologist who later diagnosed him with IBM. He considers himself lucky that he received his diagnosis only one year after first seeing a neurologist, explaining that most IBM patients wait “five or six years.”

Currently, IBM has no treatment. For the first year after his diagnosis, Manuel tried to keep living his life as normal and not be too concerned about the future. But this attitude didn’t last for long. Manuel began to search for other IBM patients and attended a conference where he met people with his condition for the first time. He also joined a patient-founded Facebook group so he could stay connected with this community year-round.

“It became a very important thing for me, because I could actually see and exchange with other patients,” Manuel says.

Manuel has even taken it upon himself to help new patients once they join the Facebook group. He wants to ensure they feel supported and are getting the right information from the beginning. Having a marketing background, Manuel thinks a lot about the best ways to communicate information to the members of his group and keep them engaged.

Since connecting with members of his rare disease community, Manuel has become dedicated to bringing patient-centered support into research, calling it “his new found mission.” He wants to help bring the patient voice into clinical trials, urging research investigators to listen to patients and understand what their needs are: “Don’t second guess patients,” he advises.

Manuel thinks it’s extremely important for every rare disease community to be involved in the research arena.

One of the reasons he joined the AllStripes IBM research program is to contribute his data to researchers working on his disease.

“The moment to act is now...we are really doubling our efforts in our support groups to bring education about AllStripes and look at the opportunities we have,” he explains.

Unlike most rare diseases, IBM is an autoimmune disease and is not thought to have a genetic origin.

“In genetic diseases, at least you have the gene. Autoimmune diseases are more difficult because we really don’t understand what causes them,” Manuel says. “We have to be even smarter and find more data points.”

While Manuel’s advocacy efforts have escalated since his diagnosis with IBM, so too have his symptoms. He describes the disease as chronic and slowly progressive, and says it usually takes 10-20 years from the onset of symptoms for IBM patients to become paraplegic. However, he explains that every patient’s progression is different. Right now, Manuel is six years into his journey and usually uses a cane to get around.

Manuel sees the people around him as his greatest strength, and believes that finding the IBM community has given him purpose. He views himself as a positive person and chooses to see the silver linings in his life. At the end of the day, he wishes people understood that even though IBM has caused his body to change, his spirit remains the same.