‘We Didn’t Know What Was Happening to Her’ 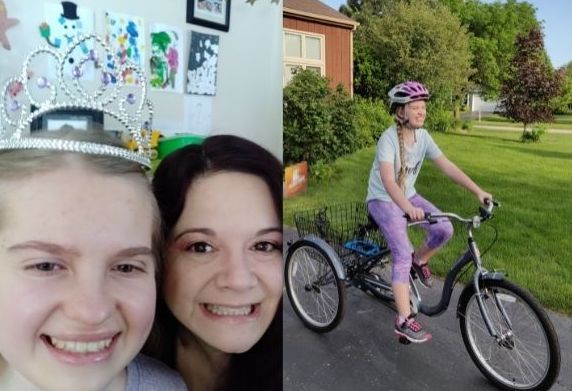 Julie’s daughter Amber, who has Kleefstra syndrome, went through a period of regression that stumped her doctors.
By José Vadi

"Hi, Amber, I love you — can we hang out later?” Julie asks when her daughter enters the room. She assures Amber that they can try calling her grandmother in just a bit, and the 15-year-old responds with a warm hug. “This is Amber,” Julie says, with a happy laugh.

Diagnosed at 10 years old, Amber has Kleefstra syndrome, a genetic condition that affects many parts of the body. Kleefstra syndrome, also known as 9q34.3 deletion syndrome, is caused by a mutation or deletion involving the gene EHMT1, which is on the long arm of chromosome 9 and controls how other genes are turned on or off. Symptoms include intellectual disability, delayed development, limited or absent speech and low muscle tone. Current Kleefstra treatment is aimed at easing symptoms of the condition, and there is currently no targeted treatment.

Julie says that video-chatting with her grandmother, who sings and tells stories, is one of Amber’s favorite activities. She also enjoys doing puzzles, swimming, dancing, playing basketball, reading books and going for walks. “At 15, she has between 20 and 30 words,” Julie explains. “She uses an electronic speech device and is able to communicate quite well with that.” But last summer, Amber stopped acting like her usual self.

In July of 2020, Amber started experiencing a number of physical and psychological symptoms, including periods of psychosis and very abnormal eye movements. Doctors weren’t quite sure exactly what was causing her symptoms or how to treat them.

“It was absolutely awful,” Julie remembers. “We didn’t know what was happening to her.” Julie knew that a Kleefstra regression was a possibility, but felt like she was in “no man’s land” as doctors tried to figure out how to help Amber.

A combination of seizure medications, nausea and vomiting worsened Amber’s symptoms and made her regression more pronounced. She became extremely sensitive to light, which meant her family had to cover all the lights in her hospital room, including the smallest lights on a television. She underwent multiple EEGs to determine whether her eye movements were seizures or an autoimmune response caused by Kleefstra syndrome. Specialists at multiple hospitals were in contact with each other to monitor Amber’s progress, and were eventually able to rule out anti-NMDA receptor encephalitis and neuroblastoma as potential contributing causes.

Meanwhile, Amber was experiencing hallucinations and severe anxiety. “Because she’s mostly nonverbal, it was really hard to figure out what was going on with her,” Julie says. “It was horrible.”

Gradually, Amber did start to get better. But by February of this year, she still wasn’t quite back to her usual self, so her doctors decided to try a medication usually used to treat schizophrenia. “She has continued to get better,” Julie says. “We still don’t know whether it was because of [the medication] or if she would’ve gotten better on her own.”

It was through iDefine, an organization seeking better answers for families affected by Kleefstra syndrome, that Julie found AllStripes.

“It’s been great having access to her records and finding out what the physicians are thinking to coordinate her care, especially since we’ve had to go across multiple hospital systems. All we can rely on is those notes.”

Ultimately, this transparency helps Julie’s relationship with medical practitioners, allowing her to feel like she’s asking the questions that will get her daughter the help she needs.

AllStripes is jumpstarting our Kleefstra syndrome program in partnership with the iDefine Foundation to accelerate research for the condition. We welcome all patients and caregivers interested in participating and spreading the word to the Kleefstra syndrome community.

“We need to be able to contribute to the research for Kleefstra syndrome,” Julie says. “Amber is the only one that’s had regression with these very abnormal eye movements. She’s either the first in her age group or — because the disorder is so small and not researched enough — we just don’t know about others yet.””