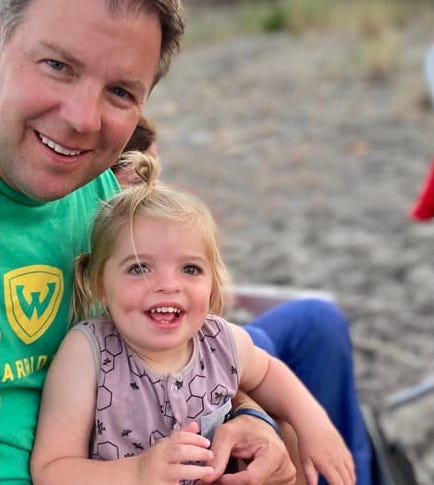 One of the best ways Matt has found to adjust to his daughter Wynne's diagnosis is by connecting with others in the Kleefstra community.
By Catherine Cooke

Wynne is a bubbly little girl with two big dimples that form whenever she smiles — which seems to be always. She can change the room simply by walking in, exuding love and happiness to all around. Wynne engages everyone who crosses her path, waving at those who pass her on her walks or show up on daddy’s work-from-home computer screen, if she can get a peek! And she does all this without being able to talk.

At three years old, Wynne has developmental delays, spurred by a rare disease called Kleefstra. This disease arises from a mutation in a foundational gene that affects multiple body symptoms. Developmental delays, intellectual disabilities, severely limited or absent speech, and weak muscle tone all characterize this rare disease that only has around 500 known cases.

It wasn’t long after her birth that Wynne’s parents noticed something might not be right. Her mom, a nurse, noticed she was having rapid eye movements, almost like a seizure. They took her to pediatricians, neurologists, opthamologists, ENT doctors, but no one could find the cause. When they’d exhausted these options, they went back and did follow-ups. They were not going to accept no as an answer. Matt, Wynne’s father, said during this period they were always holding their breath.

After so many different types of screenings, Wynne’s parents began to think there may be something genetic at play, and decided to do whole genome sequencing. However, this powerful test to uncover rare genetic diseases is still not covered by many insurance plans. At $3,000, it’s a price many families cannot afford, and Wynne is now advocating for insurance companies to make this test accessible to all:

“Studies show that if insurance companies would pay for whole genome sequencing up front, if they know there is some kind of issue, they would save money. It would save the patients valuable time, and it would result in valuable outcomes.”

After so many specialists could provide no answers, it was this test that finally gave them a name to what they’d be experiencing: Kleefstra syndrome.

For so many rare disease families and caregivers, receiving a diagnosis comes with mixed emotions.

“It was nice to have an answer,” Matt reflects, “but it was also a little bit heartbreaking because, as a parent, I was still just holding onto hope that it was a developmental delay — that someday she would catch up with her peers. But it’s now nice to have something to work toward, not wasting energy chasing down every possible disease.”

Wynne’s weeks are now full of appointments: 13 a week! Physical, occupational, and speech therapy are all part of her family’s new routine.

Adapting to a new way of life, especially in the throes of a pandemic, can be incredibly overwhelming. “When it doesn’t affect you and you hear about kids with diseases, you feel empathy, and maybe you donate money, but then you go on with your life. I don’t think people realize it’s a 24/7, 365 days a year commitment, and that just becomes your life. Everything changes, and you adjust.”

One of the best ways Matt has found to adjust to his new role as rare disease caregiver is by connecting with others in the Kleefstra community. In his free time, Matt helps with communications for iDefine, a nonprofit led mostly by Kleefstra parents, that seeks to raise awareness for the disease and funding for research and a cure.

As part of iDefine’s quest to advance research, they have partnered with AllStripes, a platform for rare disease patients and families to centrally store all of their medical data. AllStripes then works with researchers who use the de-identified data to help advance treatments and cures.

Matt is excited for this partnership because he believes, “enrolling our children’s patient data with AllStripes is one of the most important things we can do to contribute toward a cure. The researchers need the patient data, and there’s no cost to us to provide that. It’s unidentified!”

“I wish we could get every single family who has Kleefstra to enroll because it would just put us that much closer to engaging with a drug company to find a therapeutic cure. It would also give physicians a better understanding of the progression of the disease and have more case studies about what treatments do and do not work. Knowledge is power, and our patient information is knowledge.”

While Matt and his wife are doing everything they can to find treatment and a cure for Wynne, they also adore her for who she is, fully. They love her big smile, how much she adores her big sister, Josie, and her complete obsession with yogurt, which they try to have stocked at all times! Matt is so proud of the lovable girl Wynne is, who “doesn’t have a bad bone in her body.”