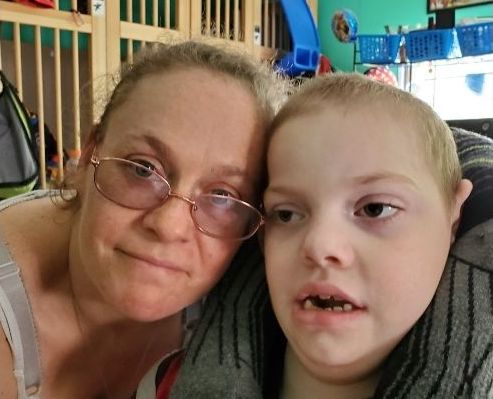 Karen would rather people take a straightforward interest in Doug than stare at him.
By Cat Cooke

"I've been through the ‘what’s wrong’ so many times,” sighs Karen, whose 8-year-old son Doug is living with a rare disease that affects his development. “But I’d prefer people ask rather than just stare.

When Doug was born, Karen wasn’t initially worried about him, but a few months later, her intuition told her something was up. “We noticed at about 2 months that he wasn’t holding his head up right,” she remembers. “I breastfed for 2.5 months, but he was really aggressive, and I would start bleeding. I put him on formula, but he also had acid reflux and gas. I jumped from formula to formula trying to find one he would hold down.”

Karen grew increasingly frustrated when her doctor didn’t take her concerns seriously. “He’d tell me, It’ll work itself out.”

Starting at 3 months old, Doug was completely inconsolable and up at all hours of the night, and eventually, when he was about 6 months, a hospital diagnosed him with a UTI.

“That same week, things went downhill very quickly. His eyes started sinking in and getting dark,” she explains.

She refused to accept that the UTI diagnosis was sufficient and took him to a different hospital demanding answers. As time went on, Doug seemed less and less like himself. He had stopped eating and only produced one wet diaper in a ten-hour period.

Karen remembers the doctors looking bewildered when they told her that Doug’s kidneys were failing and his esophagus was almost entirely eroded. Finally, they began to take her son’s case seriously.

Thankfully, Doug stabilized. He was given a feeding tube and seen by an array of specialists, including gastroenterologists, neurologists and geneticists.

It was after genetic testing that Karen and Doug got an answer. Doug was diagnosed with the extremely rare disease Lesch–Nyhan syndrome (LN), which is caused by a genetic mutation of the HPRT1 gene and affects mostly males. Symptoms may include self-injurious behavior, kidney problems, pulmonary issues and dysarthria (an inability to control speech-making muscles). Most people with LN do not live past their 20s, and current treatments are aimed at easing symptoms.

“My son is a very happy boy, but he gets into bouts where he is not happy,” Karen explains. “When he gets irritated, his arms and legs will flail, and he may hit when he doesn’t mean to.” Doug has to have mitts on his feet at all times because they’re a target of his self-injury, and he’s had to go to the hospital many times for the injuries he’s inflicted on his left heel.

Karen has found a sense of community by connecting online with other LN parents, who she describes as a great resource for encouragement and information. One of the things she learned about from other LN parents is AllStripes, which she quickly signed up for.

AllStripes is a platform for rare disease patients and caregivers to centrally store their medical information online. No more having to remember where different files are. With AllStripes, everything is in one place.

AllStripes also provides researchers with de-identified medical records for the specific rare disease they are researching. This allows patients and caregivers to contribute to research without ever having to leave home.

“I just want to get out more information about LN so it’s not so secluded,” Karen says. “I want people to be more aware. I want LN to be brought out into the light.”