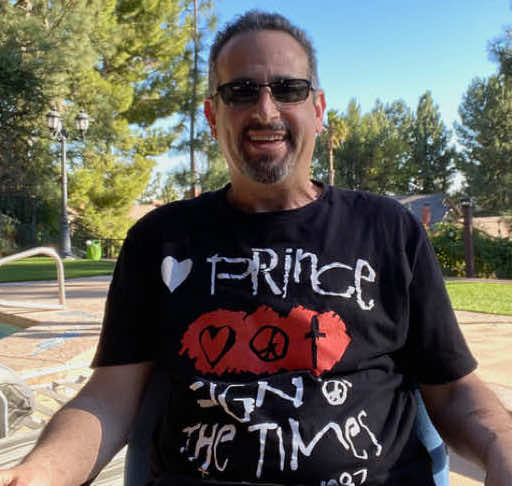 In the span of a month, Al was diagnosed with late-onset Tay-Sachs disease and his fiancée broke off their engagement. Here's how he learned to surrender to the flow.
By Taylor Kane

When Al was in his 30s, he started having trouble bending his legs and walking up and down the stairs. The first neurologist he saw told him he had a cyst on his cerebellum, and that he may have multiple sclerosis or Parkinson’s disease. After another neurologist told Al he did not suspect these diagnoses, Al underwent genetic testing.

“My parents and I went in right before Thanksgiving to give 20 vials of blood,” Al explains. A week before Christmas, Al was diagnosed with Late-onset Tay-Sachs disease, a type of GM2 gangliosidosis.

“Our jaws hit the floor,” he says.

Al’s first step after his diagnosis was to learn more about his disease and in the process got connected with Eric, a man of a similar age with late-onset Tay-Sachs who lived close by. Al was grateful to meet another person with the same condition. Soon after meeting, they co-hosted a Shabbat celebration to teach Eric’s friends about late-onset Tay-Sachs — a rare condition that most people have never heard of before.

In 2019, Al attended his first National Tay-Sachs & Allied Diseases Association conference. He admits that while he mostly enjoyed it, he spent a lot of time alone in his hotel room crying. Out of the 30 or so people with late-onset Tay-Sachs at the conference, Al says only a few of them did not use a mobility aid. Al was forced to face what his future with his condition could look like.

Thankfully, Al is doing well and says his physical and mental health have both improved. To date, he has participated in multiple research studies, including one at the University of Minnesota. A self-described “die-hard Prince fan,” Al was able to make the most of his trip and visit Prince’s home and studio in Minneapolis. He plans to continue to be involved in research whenever possible, and joined AllStripes as one way to do that without leaving home. Al wants to do what he can to help raise awareness of rare diseases and calls AllStripes a “very worthwhile” program to be involved in.

When not participating in research, Al is working to become a marriage and family therapist. He has a master’s degree in psychology with a specialization in marriage and family therapy. In the wake of his rare disease diagnosis, Al wasn’t able to complete the required training hours to become a certified therapist and was denied accommodation. Tenacious at heart, Al wasn’t giving up that easy. He restarted the training and has about 800 hours left. “My dream position is working with other adults and children who have received medical diagnoses that are difficult to deal with,” he says.

If he could go back and tell himself something on the day he received his diagnosis, he would reference a line from his favorite band, Phish: “The trick is to surrender to the flow.”