What I Want People to Understand About Having Morquio A 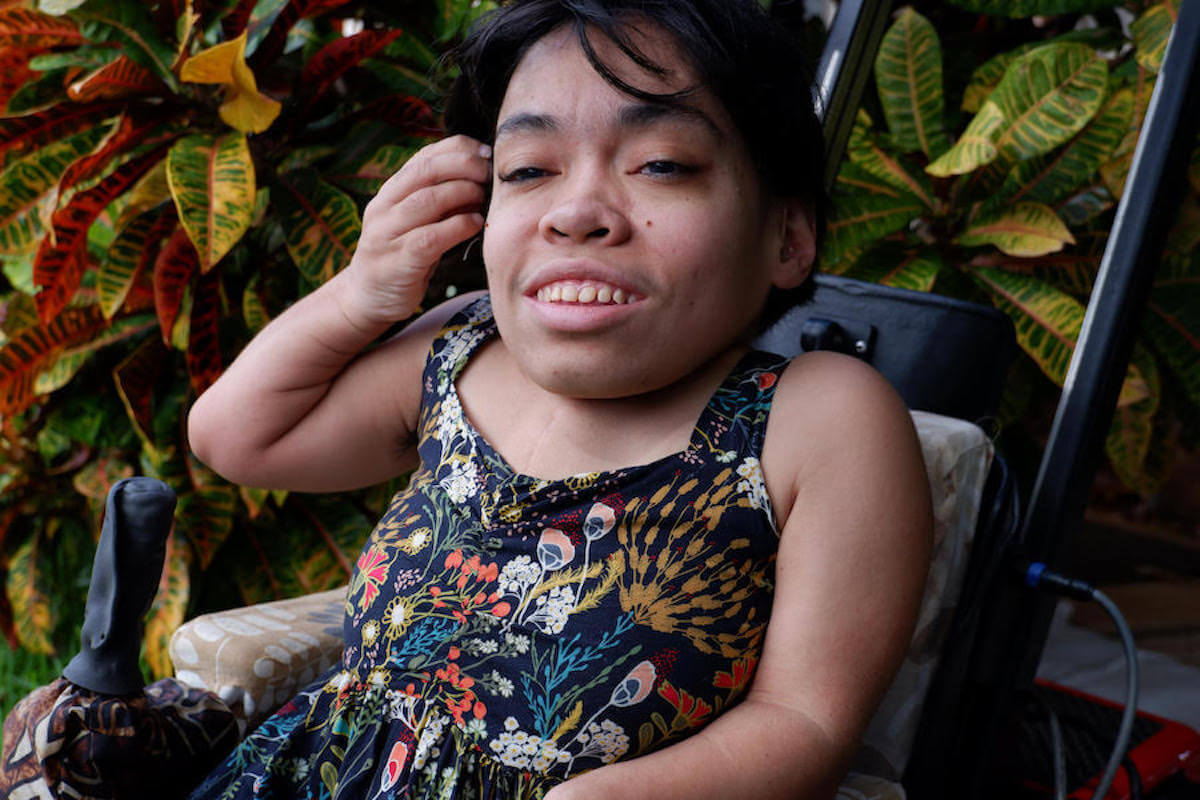 “There are times when it’s not fun, but there are benefits you’ll see once you accept the diagnosis and begin to meet others.”
By Maria, as-told-to José Vadi

There’s a charismatic energy that powers Maria’s jokes and stories that’s super palpable, even across oceans and over video chat. She spoke to AllStripes from her home in Hawai’i, where she moved after a childhood full of crafts and winter sports in New York and Vermont. Childhood is also when Maria was diagnosed with Morquio A, a rare genetic disease caused by pathogenic variants in the GALNS gene. Below, Maria discusses how being an active, creative people-connector can make all the difference when it comes to living with Morquio A.

Growing up my parents made sure I went on every single school field trip. We’d go ice skating, my dad got the walker, taped the wheels up so I could make it happen. Skiing too! That’s my dad for you — this is not stopping you. Of course he wasn’t letting me jump out of an airplane, there was some limitation, sure.

When a little kid comes up to me and says, You’re smaller than me but you act my mom’s age, I’ll explain to them that I was born with my disability. I show them my wrist, which is so floppy, and say, You know how you can stretch rubber bands? Well that’s what’s going on here. My “rubber band” — which is a ligament — is like a rubber band that got stretched. For an adult, I can tell them I’m missing an enzyme and that my parents had no idea that they were carriers of this gene.

Right before my first birthday, I fell off a toy, stopped breathing for a moment and turned blue. I was in the hospital for a week. Then, after going home and seeing a specialist and finally getting an MRI, I had surgery. I woke up and my mom said I had the biggest smile on my face, even with this giant halo apparatus on me. I had to relearn to walk with the halo because it’s heavy. I had it on for three months and that’s when they started to look for the cause.

It took the doctors a little while to figure out what I had. My mom found out on accident. She overheard a radiologist technician recording his notes saying, “patient with Morquio syndrome.” She asked the geneticist, who confirmed it.

And this is 1991, so my parents were alone in this, really. I don’t know how they did it. Nowadays, you see people on Facebook connecting with people with the disease in five minutes.

I personally didn’t meet anyone with Morquio until I was in middle school. Now, I have a huge community of people online. I run this nonprofit called Morquio Community and the reason it exists, first and foremost, is to strengthen our community. Morquio Community officially got nonprofit status during the pandemic. Our motto is “come meet, come teach, come learn.” Everyone can teach someone something. Even a 5-year old with Morquio can teach another 5-year-old who doesn’t have Morquio something.

What I really like about AllStripes is the fact that all the data that AllStripes is going to collect for us on our behalf is still owned by us, the patient. That to me is empowering. I’ve been in other studies before where I don’t get to see the results.

We do want research to happen, but I feel like I’ve learned a lot more about living with my disease from other people living with it themselves. When you go to the doctor, you go there for medical things, but they don’t teach you how to open up the door in your house that might be difficult — that’s something you’re going to find from others who have already found a solution.

My biggest thing is for people to understand that being diagnosed with Morquio A is not the end of the world. Some people think it’s a terrible thing, they hate the disease — get that hate out of you. You don’t want to spread it to your child who may have been diagnosed. There’s times when it’s not fun, sure. When I’m in surgery, yeah I wish I didn’t have it, but there are benefits you’ll see once you accept the diagnosis and begin to meet others.

That’s what I hope other people take away and understand — it’s not the end of the world.

If you have been impacted by
Morquio A
,
learn more about the benefits of joining AllStripes
by visiting our
Morquio A
research program page.
Share: