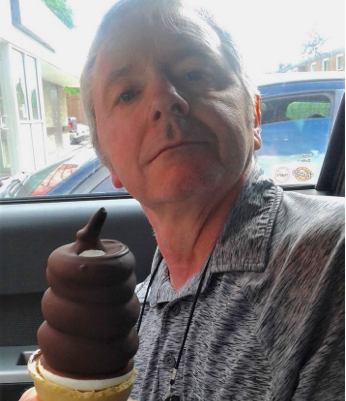 One wrong click of the mouse led to Tim unknowingly publishing his online journal about progressive supranuclear palsy for all the world to see. He never could've imagined what happened next.
By Catherine Cooke

Seven years ago, Tim Brown was diagnosed with a disease so rare, the only results that came up when he searched for information on Google was a Playstation gaming console with the same acronym. PSP, or progressive supranuclear palsy, is a rare disease that affects your balance, swallowing, movement and vision.

The disease is caused by a buildup of the tao protein, the same protein that builds up in Alzheimer’s, and there is no treatment. The average life expectancy once diagnosed is about seven years, which Tim has now surpassed, but it is terminal.

When Tim received the diagnosis, he said, “It froze me there for a while, and I had to come to terms with it.”

Since so little is currently known about the disease, his support worker encouraged him to keep a journal of his daily life in the event that it would be helpful down the road. He started what he thought was a private blog for a few people, but he clicked the wrong settings when he set it up.

His blog was accidentally made public. With so few detailed resources on the internet for PSP patients, others with his same disease found comfort in his words, and it soon gained steam. “The PSP Chronicles,” as it was called, was read around the world.

“It’s a small community, but it’s a global community. Its reach was pretty far and wide,” Tim shared, still amazed.

“It came to me one day that I should be able to take my journal and blog and turn it into a book form to monetize it. Not for me, but as a platform to raise awareness and a way to advocate for it. My book royalties are donated to Cure PSP, PSPA, PSP Society of Canada, and a few smaller organizations.”

Tim quickly taught himself Google Analytics, social media marketing, and how to build successful campaigns around days like Giving Tuesday. He chuckled, “I’m not that tech savvy, and new things don’t come to me very easily, so sometimes I have to muddle my way through.” But Tim has proven that you don’t have to be a professional marketer to raise global awareness.

“I get frustrated sometimes because I’m one person in my little corner of the world trying to bring attention to a disease that so few people know about, especially the medical community. When the doctors and nurses don’t even know, how are you supposed to be helped?...What was the best thing I could do from my little spot in the world of rural Ontario?” he asked himself.

Sharing his story was the answer. Another way Tim is making a difference is through AllStripes, an online platform that allows him to contribute his de-identified medical records to research for PSP treatments.

“By signing onto AllStripes, you’re expanding your platform and connecting with more and more people. It increases the chances of a treatment and a cure being found that much more quickly. AllStripes is the engine behind a lot of research and helps us raise awareness for our rare disease like we’ve never seen.”

Tim does not see himself as a victim, taken out by an unfair sentence. Rather, he finds strength in being an advocate to take on PSP: “If you’re looking to find a cure and find a treatment, don’t expect someone else to do the work. It starts with you!”