A Repurposed Drug Helps Michael Do the Things He Loves, While KLA Research Continues 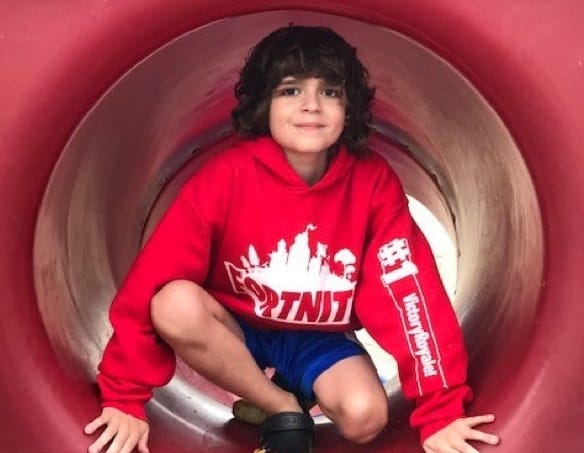 As physicians, Michael’s parents struggled with watching him suffer from unexplained symptoms, without a diagnosis or path to make everything better.
By Taylor Kane

Kimberley, Michael’s mom, says he was the “smartest, happiest, bright-eyed, beautiful baby.” She calls him her ‘miracle boy,’ because as an older mother, she had to go through a lot to have him. When Michael was 5 years old, he developed a terrible fever. His pediatrician brushed it off as a virus, but Kimberley had a bad feeling.

Ten days later, Michael presented with a rash all over his body. He began to recover but remained lethargic and fatigued, and Kimberley noticed swelling in his groin. Michael began coming home from school with bruises and had a poor appetite.

The bruising is what got doctors finally concerned. Michael was clinically diagnosed with idiopathic thrombocytopenic purpura (ITP) and was started on IVIG infusions. He later received a different diagnosis, this time aplastic anemia. For the next year, Kimberley and her husband took Michael to over 12 specialists and even met with the world’s expert on aplastic anemia at the NIH. They were left with no answers.

Later that year, Michael hit his head while playing during a family vacation and developed a large blood filled bump that continued to grow. It caused him horrible pain and vomiting.

As a surgeon, Kimberley has dealt with a lot of blood, but in Michael’s case she felt helpless: “I watched this thing just expand. I’ve never seen anything like it.” He was rushed to the emergency room and hospitalized for eight days with a severe coagulopathy (bleeding).

Undergoing many tests, the doctors did an MRI. After receiving the MRI results Kimberley and her husband learned that their son was likely suffering from some form of lymphangiomatosis, a term neither of them, even as doctors, had ever heard before. They Googled the term and their lives changed from that moment.

Grateful to be in the medical field, Kimberley began reaching out to all of her colleagues and researchers all over the world to find an answer. The family traveled to Boston Children’s Hospital to meet with Dr. Denise Adams who diagnosed Michael with kaposiform lymphangiomatosis, or KLA.

First described in 2014, KLA is an ultra rare condition in which lymphatic vessels develop atypically and can invade and cause damage to surrounding tissues, bones and organs. KLA falls under the umbrella of complex lymphatic anomalies, or CLAs. As Kimberley describes, KLA is a “somatic mutation, which means not every cell is affected.” This results in patients having a variety of different presentations and symptoms, which makes the condition even more difficult to diagnose.

While KLA has no treatment or cure, meeting Dr. Adams changed the course of Michael’s life. “She gave me a list of doctors, scientists, and people I might need along the way. That was the power of one to me. [Michael] brought all these people together,” Kimberley reflects.

The family headed home and Michael underwent further tests, including multiple biopsies, which caused him to get very sick.

“The disease is thought to worsen with infection, inflammation, trauma and puberty,” Kimberly explains, “Having the biopsy revved it up. It was a trauma.”

Looking to the future and driving forward research

Now, Michael is on a repurposed medication that was developed to prevent organ transplant rejection, which is helping to keep him stable. A young patient advocate, he was invited to speak at the American Society for Pediatric Hematology and Oncology and wrote a blog post about his journey with KLA thus far.

“I am lucky that my doctors, nurses, and other medical support have worked together to help me,” Michael wrote in his story. “Hopefully, the information they’ve gained from treating me will help other kids to have the great same treatment so that they can run, swim and climb like I love to do.”

Both Kimberley and her husband are physicians and have become advocates for KLA in their own right. While neither have expertise in this area, Kimberley’s husband Greg did all of the reading and Kimberley reached out for help, through networking and utilizing what skills she had from her day job. She contributed to research by writing and helping with grants and a case report about Michael, which led to the institution of a clinical test for KLA that avoids biopsies and inspired a clinical trial that will be launched soon.

“Greg and I had the opportunity to reach out to whoever we needed to for help. To this day, I think about parents who don’t have that and have to do it all on their own.”

Kimberley has stepped away from her day job as surgeon-scientist and has joined Lymphangiomatosis & Gorham’s Disease Alliance as the director of patient-led research to help “accelerate the science.” Having navigated the health care system as a mom through the eyes of a physician, she understands the “Power of One” and how valuable the patient’s voice is.

She hopes to serve as the bridge between the patient, clinicians and scientific communities, and advocates for medical professionals to “listen to parents, because they know their kids best.” And, likewise she asks her community to share their stories, contribute in any way that they can – be it surveys, registries, natural history studies, research or advocacy because if not now, then when and if not us then who? Further, she wants her community to know that they have an incredible clinician and scientific community out there working 24/7 with passion, persistence and determination to beat this ultra-rare disease.

Kimberley signed up to be an Ambassador for the AllStripes KLA research program because she recognized the importance and the need for her community to collect longitudinal data on the condition to help her better understand what Michael’s future will look like: “I haven’t met any adult KLA patients. I as a parent want to know if there are patients out there, and the only way we are going to know is by doing natural history studies and asking everyone who is out there to contribute. In this way, we are not only helping the individual but our community as a whole.”

The AllStripes platform enables rare disease patients and caregivers to access all their medical records online in a secure account, at no cost, and contribute their de-identified medical history to advance treatments for their condition.

If you have been impacted by
KLA
,
learn more about the benefits of joining AllStripes
by visiting our
KLA
research program page.
Share: