To Honor Her Sons’ Legacies, This Mom Dedicated Her Life to Helping Others 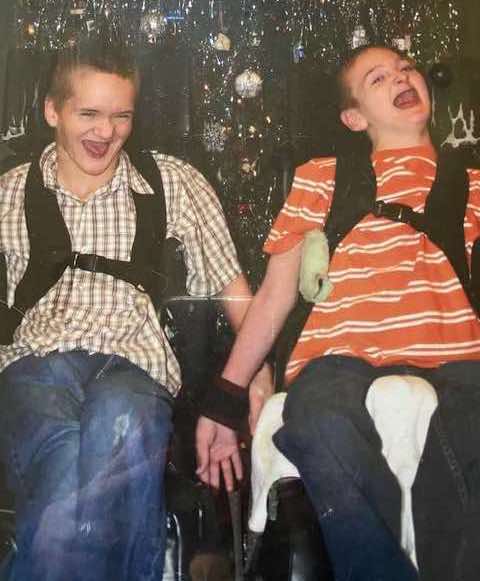 Michelle lost both of her sons to a rare condition called Lesch-Nyhan disease. Almost a decade later, she remains a leader in the Lesch-Nyhan community and works tirelessly to support caregivers and patients.
By Taylor Kane

"I have walked the walk that so many fear. I have felt alone. I have felt betrayed. I have felt there was no one else who could understand my pain,” Michelle says when reflecting on her family’s journey with a rare disease called Lesch-Nyhan disease.

When Michelle’s firstborn, Keith, began to bang his head on the floor when rolling over, Michelle tried not to worry. A few months later, Keith began to twist his hands inward and was having trouble learning to sit up and grab at toys. After taking Keith for neurological testing, Michelle says a neurologist told her the issue wasn’t brain damage and diagnosed him with atypical cerebral palsy.

Michelle pushed for further testing. However, the next few years produced more questions than answers, and Keith’s symptoms continued to progress and become more concerning. Michelle noticed that his diapers appeared to be filled with a substance that looked like orange sand, but doctors seemed unconcerned.

When Keith was two and a half, he began biting himself. Michelle placed splints on her son’s arms and gloves on his hands.

“We were trying to protect our child from himself,” Michelle explains. Ultimately, Keith received a diagnosis of Lesch-Nyhan disease.

Lesch-Nyhan is a genetic disorder that causes a deficiency of the HRPT enzyme. Abnormally high levels of uric acid build up in the body, causing intellectual disability and self-injuring behavior. Doctors warned Michelle that Keith would continue to self-mutilate.

One morning when Michelle was changing Keith’s gloves, she discovered that Keith had severely damaged his thumb: “There before my very own eyes was what was left of a thumb.” The wound had already begun to become infected.

As this was the mid-1990s, access to the internet was not as widespread, so Michelle headed to the local library. She found very little information on Lesch-Nyhan disease.

“I felt so alone,” she explains. Later, when the internet became more accessible, Michelle was able to find a community and begin to help others impacted by Lesch-Nyhan.

Soon after Keith’s diagnosis, Michelle discovered she was pregnant again. Even before her second son, Daniel, was born, Michelle had a bad feeling. When Daniel was three months old, Michelle noticed the orange-sand substance in his diaper.

“My hopes once again shattered,” she recalls. A few months later, testing confirmed that Daniel, too, was impacted by Lesch-Nyhan disease.

“There seemed to be no hope… I was lost in my own world of self-pity.” Michelle admits that her sons’ diagnoses made her mad at the world. As time went on, she became less angry and even more focused on being a caregiver for her sons.

Sadly, both Daniel and Keith ultimately passed away from complications related to Lesch-Nyhan disease; Daniel in 2010 and Keith in 2012.

Michelle wishes people understood that while Lesch-Nyhan disease causes self-injury, individuals with the condition have no control over their actions.

“It’s like their bodies are their worst enemy,” she explains.

Since her sons’ passing, Michelle has dedicated her life to helping caregivers of children with Lesch-Nyhan. She is a leader of a Lesch-Nyhan Facebook group and often talks to caregivers on the phone, helping them to navigate their challenges with the disease. She also founded a non-profit organization called Love Never Stinks and helped organize the first-ever Lesch-Nyhan disease conference.

Michelle says that the memory of her sons drives her to continue to help others in the Lesch-Nyhan community.

She recently became an AllStripes Ambassador and helped launch our Lesch-Nyhan program. AllStripes is a rare disease research company working to unlock new treatments for people with rare disease.

Michelle became an ambassador because she believes the Lesch-Nyhan community’s participation in AllStripes will lead to more research, and help set protocols for medical professionals to use when caring for patients with Lesch-Nyhan disease.

Ultimately, Michelle is a believer that everything turns out the way it is supposed to. She sees her children as a gift from God, and said they are the reason she will continue to help others and work toward a better future for those impacted by Lesch-Nyhan disease.