‘Even Though I’m in Remission, I’m Still Tired’ 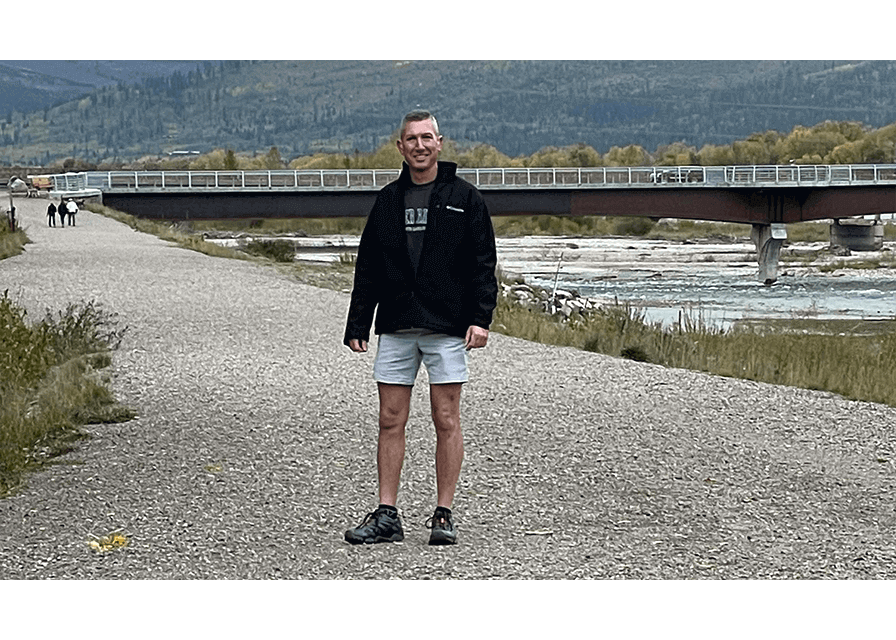 My interest is in remembering how afraid I was being in the hospital and not having a single person that I could talk to that understood what I was going through. That's why I've stayed connected.
By Sean Powell, as-told-to AllStripes

Sean Powell is a self-described fitness buff who loves running marathons and hiking in National Parks, so he was especially shocked to be diagnosed with wAIHA, an autoimmune disorder that causes one’s body to destroy healthy red blood cells. At the time of his diagnosis, Sean was unable to find much information, or any support groups for people with this disease. Though he went into remission in 2019, he’s remained an active part of the wAIHA community, because he remembers how it felt to be alone.

I was extremely healthy. I was running half marathons; I could do anything I wanted to. The year before I was diagnosed I'd run a half marathon, and done crazy hikes in Glacier National Park. But then I literally woke up one day and just didn't feel good. Over the next month, I grew progressively more tired and short of breath to the point that I finally had to go to the emergency room, and ended up in the hospital for two weeks with this disease — wAIHA — that I’d never heard of. And I work in healthcare.

I'm a hospital administrator and I've worked in oncology for almost 25 years now. I'd never heard that you could have an immune disorder that actually attacked your blood cells. So it was shocking. The only support resource I could find was ARDA, the American Rare Disease Association. Even there, there wasn't much for us. But through ARDA, I found an organization for people with rare diseases to sell their experience to drug companies. Someone there wanted to start a support resource for people with WAIHA. I want to say that was about six months after being diagnosed, and that was the first time that I finally talked to someone else who had the disease. We're very few and far between. There's only 30,000 people a year diagnosed with this.

Even though I'm in remission, I'm still tired. I've never regained the level of fitness I had before. It’s just this weird thing that almost nobody has, that lives in your body and can come back anytime. The only thing my doctor told me I could do to keep it from coming back is get enough sleep. So it's very similar to living with leukemia, because once you're in remission, it can come back anytime, and there's nothing predicting when it's going to come back.

I’m now around the third anniversary of the time I first had symptoms, and every year around this time I get anxious, because I'm like, is it going to come back this time? Because it came out of nowhere in May of 2019. So I’ve just been living with that uncertainty.

Talking with other people that truly understand is extremely helpful. I am a licensed clinical social worker by training, so I understand the need for support groups and connecting with other people. My interest is in remembering how afraid I was being in the hospital and not having a single person that I could talk to that understood what I was going through. That's why I've stayed connected. I have been assigned — through wAIHA Warriors — to be a mentor for a couple of newly diagnosed patients. I get value in being able to talk to people who are going through it. I can say, “Look, this is what worked for me. This is how you feel. That's completely normal.” It feels nice to connect with people that understand the night sweats and the fatigue and the fear.

I think what has been most enlightening is that all of our experiences are completely different. I had an acute onset, but there have been other people I've spoken to that dealt with it for years before they figured out what was wrong with them. I was also fortunate. Steroids didn't work at all for me, but fortunately, one medication worked extremely well. But I’ve talked to other people who have been on this same therapy and nothing is working for them. So it’s been extremely enlightening, but also a bit guilt-inducing, because the second therapy worked, and it worked immediately. I went into remission and not everybody has that. Some of these people have been dealing with it for years. I don't suggest a treatment. I just say, “This is what worked for me.” If they're really struggling, I try to present my story in a way that doesn't sound like it's bragging. I don't want them to feel bad.

What's been interesting to me is the drug companies’ desire to understand our experience with the disease, not just focus solely on creating a cure. There is so little known about wAIHA and there is so little research.

I work at an NCI-designated cancer center. I did some research studies myself, so I'm able to read and interpret them. When I was in the hospital, I was on Google and the Centers for Disease Control, looking for any clinical article, but there wasn't much. I think I found one from the 1950s.

Steroids are still the first line therapy for many people, and not drugs like the one I’m on, which caused fewer side effects and worked immediately for me. So I would really like for people to find a cure to this. Nobody can tell me why I even got it. Why did my immune system decide to go haywire? Is it my genetic makeup? Can I pass this on if I were to have children? My mom and sister both have autoimmune conditions, so is this familial? I want more answers.

If you have been impacted by
wAIHA
,
learn more about the benefits of joining AllStripes
by visiting our
wAIHA
research program page.
Share: