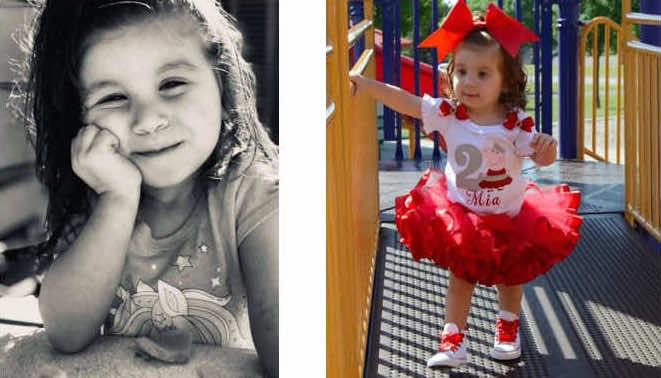 When McKenzie’s daughter, Mia, was diagnosed with Leigh syndrome, McKenzie blamed herself for it. “Because it’s inherited,” she explains, “you get that feeling that you contributed in some way.”
By Taylor Kane

For more than a year, Mia had been having tremors that got progressively worse. After a trip to the emergency room, an MRI showed that she had lesions on her brain. The doctors thought Mia had an autoimmune disorder: possibly Guillain-Barre syndrome.

McKenzie reveals that deep down, she knew her daughter wasn’t suffering from Guillain-Barre, but she wasn’t exactly sure the cause of Mia’s symptoms. A follow up MRI showed that Mia’s lesions had worsened.

The family made the decision to pursue whole exome sequencing, a type of genetic testing that investigates the protein-coding regions of the genes in a person’s genome. It took about three months for them to receive the test results.

“The wait was really scary. They’re looking at so many different genes and I had so many different fears running through my mind,” McKenzie says. When she finally got the call from Mia’s doctor asking her to come in to discuss the results, McKenzie explains that she was relieved because she knew that there was some answer.

When McKenzie and her husband arrived at the doctor’s office, they initially met with a genetic counselor, who told them that their daughter had SURF1-associated Leigh syndrome, a rare condition she had never heard of. Then, the genetic counselor left the room to get the doctor.“As soon as she left the room, I got on Google,” McKenzie admits. “It was really overwhelming and scary at that point, because she hadn’t told me the things that I was going to find on the Google search.”

In McKenzie’s words, SURF1-associated Leigh syndrome is a disease that “inhibits the body from making the energy it needs to to supply the organs so that they function properly.” She describes the diagnosis as still being a fresh wound since her daughter was only diagnosed last June. She has battled feelings of guilt because the condition is genetic, but knows it is truly not her fault.

McKenzie and her husband have another daughter, younger than Mia, who is a carrier but does not have the condition. Mia’s younger sister understands that Mia is different from her, and tries to help her whenever she can. “Her younger sister, she’s two, and she helps Mia take off her shoes and take off her braces. She holds her hand when she’s going up and down the stairs,” McKenzie explains.

She wishes everyone could be as understanding.

“I wish people understood what parents with children who have rare diseases go through,” McKenzie says. “Sometimes you just need someone to listen.”

As an AllStripes Ambassador, McKenzie says she will jump at any opportunity she can to help her child and any other child who is impacted not only by SURF1-associated Leigh syndrome, but by any rare disease.

Since Mia’s diagnosis, McKenzie explains that her perspective has changed.

“I used to be someone who was about the bigger picture, but now I’m taking things more day by day.”

She and her husband have switched their focus to make Mia’s life the best it can be and they maintain hope that there are better things to come for her.