How Kim’s Parental Intuition Helped Her Son James Get Diagnosed 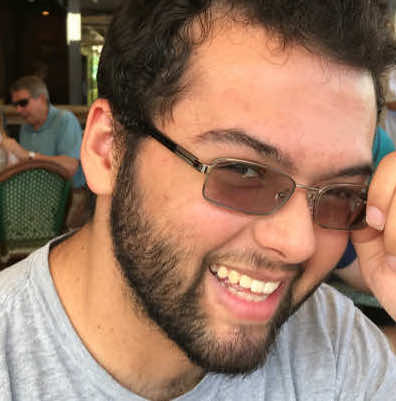 Kim’s son James began experiencing strange symptoms while away at college. The mystery condition began taking over his life, and eventually Kim tracked down what was happening: Wilson disease.
By Catherine Cooke

Kim's story is one familiar to many parents. There is a seemingly unexplainable intuition that alerts you when something is amiss and fuels a drive to fight for your children at all costs. But it’s easy to question that intuition, especially when being challenged by experts. Kim’s story is one of trusting her instincts and being bold enough to question authority. But was she right in her intuition?

His symptoms began when he was away at college. Like many college students, James was stressed after changing his major. At that time, he developed what his family lovingly referred to as “the wiggle” when he spoke, which Kim just attributed to his stress.

One night, James suddenly developed numbness in half of his arm. In just 24 hours, it spread throughout his body and then soon disappeared. Something seemed off. From afar, Kim urged her son to go to the hospital and get a blood test. The results? The bloodwork was tainted. He’d have to do it again. The second time? Tainted again. Hesitant, they tried one more time. Finally, he received news that his liver enzymes were elevated but that it was totally unrelated to his “wiggle.”

James’s symptoms got worse. He began drooling and became more and more quiet. Soon, he could barely eat on his own; it took him over an hour just to eat his lunch.

Although doctors told her otherwise, Kim wasn’t convinced that James’ symptoms were unrelated to his elevated liver enzyme results. She began diligently researching and discovered a rare disease that fell in line with all of his symptoms: Wilson disease.

But she questioned herself: “Who am I to bring that up? How ridiculous it is that the mother is trying to diagnose. This isn’t an episode of House. I’m not a doctor. I’m a teacher!”

Kim and her husband took James — who at this point had to leave college — to the hospital. He was diagnosed with early-onset Parkinson’s, but “just in my gut, I knew that wasn’t it,” Kim shared. Her husband questioned her taking on the doctors, but in her gut, she knew she had to keep pushing back, even if at risk of seeming crazy.

Finally, after pushing for answers from an array of doctors, they received a new diagnosis. Kim’s intuition was right. James had the rare disease she had found months before. Wilson disease is a genetic disease that affects the body’s ability to eliminate copper. This, in turn, affects the liver, kidneys and brain.

One year later, Kim shares that “he’s unable to talk, but he does try ... He can stand and walk with assistance. He can sit himself up. He can hold himself up. Mentally, he’s fully there and understanding what’s going on. He wants to talk so badly. He uses an autism app to communicate, but he has limited mobility in his fingers that prevents him from being able to use it fully.”

But there’s a glimmer of hope. From time to time, James has what Kim calls “breakthrough” moments and spontaneously he is better for a little while. He’ll stand, speak a few words and even laugh.

Kim now holds on tighter to her intuition: “I know I’m just the mom, but I truly believe that these little episodes of coherence and behavior show that there’s a path. There’s something there. I know he’ll never be 100%. I’m realistic, but in my soul, I know that he will get better. If I can just get him what he needs, he will improve. I know it!”

One of the ways Kim is working to get James what he needs is by joining AllStripes, a platform for rare disease patients to centrally store all of their medical records and make the de-identified information accessible to researchers who are finding treatments for their disease.

“I wanted all of his medical records in one place so that I could look back if I needed to or I could have a doctor go in and be able to see everything,” Kim said. “I also wanted for people who are doing research on this disease to have as much information as possible because there are so few. They should be able to have that access so that they can do whatever work they need.”

While it frustrates Kim that rare diseases receive so little attention and funding, she remains hopeful that organizations like AllStripes will be a much needed voice in the medical research field.